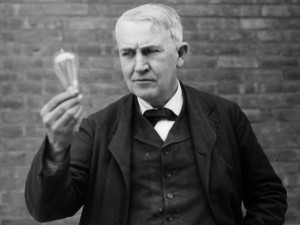 Day 508. Success is not about succeeding all the time, it’s about failing more. What if we were succeeding every time we start something? We would probably lying. I do not know somebody who did not fail at one point. May be if you are not doing anything you might not fail, true, but you will not succeed either. Success and failure are brother and sister. They cannot live without each other. People who are complaining all the time are generally the one who never failed because they have never done something significant. Is there something wrong with this? Yes, they tend to undermine the actions of others who might try.

Our own pursuit of happiness should tell us to do, to at least try. Yes this might fail, so what? As Edison said, he has not really failed 10,000 times while trying to create the incandescent bulb, he has found 10,000 ways that did not work. But those 10,000 failures, let’s call them like that, were necessary for the one success. I personally always remind myself of Edison’s story because it shows that delivering, failing and persisting are the best ways to learn. But once you fail, try again. As I was saying yesterday, what matters is not the end it’s the journey. You do not learn anything by reaching your goal, you learn by working towards your goal. Subtle but profound difference. Because if failure occurs and you do not reach your goal, you still have learned a lot on this journey that lead to failure.

The issue is we are taught to succeed and we are discouraged when we fail. We remember the one that gets the gold medal and forget all the others. We all know the world is not fair. Well if you don’t, you’d better learn this fast. As Abba was singing it, the winner takes it all. But the losers get the same learning and experience. Failure to deliver, failure to show up, failure to try are real failures, because they tell a negative story, a story of somebody who has not even try. Do it, ship it, deliver it, show up, it might fail, and it’s great!