Since last Monday, there have been overwhelming tribute to the late David Bowie. Sales of BlackStar, his last album, launched two days before he died, have surged to a point of becoming number one in the UK. I have not been a die-hard fan of Bowie, but have enjoyed many of his songs, danced on Let’s dance. Modern Love and China Girl, listened thousands of time to Ashes to Ashes, but no other songs made as strong an impression on me as Space Oddity. 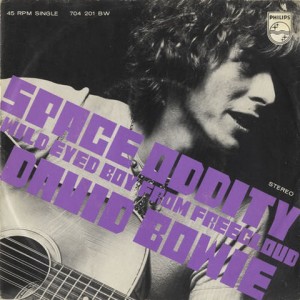 While thinking about Space Oddity and browsing Youtube, I found the original video of the song:

It’s a very interesting version compared to the one that is most commonly known:

I do not know which I prefer, but it almost seem two different songs, the 1972 version adding more instruments and changing the voice completely. Not even talking about the almost dreamlike images of the 1969 versions, compared to the almost dull images of the 1972 one (honestly, the guitar rifs are not even synced with the music, but eh, we are in the 70’s…)

I discovered the version Chris Hadfield recorded in the ISS while reading his book (wrote a blog post on this):

This last one takes a new flavor now Bowie’s gone. It’s probably not the best version of the song, but it’s the only one (with some changes in the words) that is resonating with a real in space experience.

One of the reasons this song has such an impact on me is probably the fact I always been interested into flying and I wanted to be a fighter pilot until the day I was forced to wear glasses, and needed to forget my dream (that I overcome by getting my windglider pilot license at 17, more than a year before my car driving license). I still love flying today, although I do not pilot gliders anymore, but I still believe it’s temporary.

Having said all this, what is the song that made a strong impression on you and that you are still singing or whistling years after, and that makes you happy?