Day 700 Have you flown a commercial flight recently? If so, you probably noticed it’s a non-smoking flight. I think I have not flown in a plane where smoking is permitted for 20 years. Every time, the flight attendants remind that « this is a non-smoking flight, smoking is not permitted in the toilets… ». However, back in time, smoking was permitted, just not during take-off and landing. This is why we had the no smoking and fasten seat belt signs next to each other. 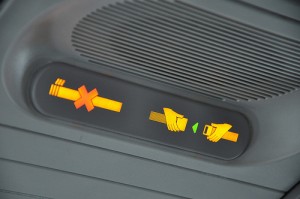 But in 2015, soon to be 2016, why keeping the no smoking sign? Times have changed and there is something we cannot do only during take-off and landing phases: having our electronic devices on. So modern airlines have started to change their signs with an « electronic devices off » sign, replacing the no smoking one. It makes perfect sense. I started to notice this trend a year or two ago. The interesting point though I noticed is there seems to be a correlation between the new sign and the way the airline takes care of its passenger. In other word, if the airline embraces the new sign in its planes, the meals are better, the service is enhanced and the flight attendants feel more caring. 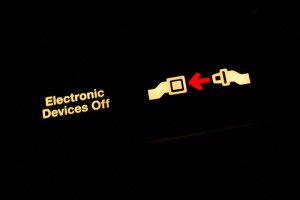 But it reflects a deeper change: embracing modern tools. Those are the same airlines equipped with modern devices, both for the pilots and the flight attendants. Those are the same that provides power to the passenger at their seats. They have understood that if they want to be a trusted brand, they need to embrace new tools at the same pace as their customers. Companies who will not make the necessary decision to be modern are doomed to disappear not by going bankrupted, not necessarily. They will just become irrelevant and will be swallowed by larger ones and forced to change. Darwin was somehow right.