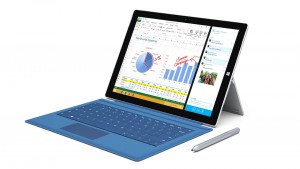 Whether your next PC should have a touch screen is not even a question. It becomes obvious. Whether it should have a keyboard is although not a question. The ubiquitous tablet is the new PC. Said I as I type on my Surface Pro 3. The holy trinity of IT, Microsoft, Apple, and Google have all their offerings, each with its benefits, apps, ecosystem and user interface. But let’s see why touch has become an obvious choice.

Of course you may want a lot of processing power to do picture or movie editing for instance or require a bigger screen. Not all applications will be 100% adaptable to the tablet world, I bet though first that a vast majority of usage can be fulfilled on a tablet and second that processor power will increase in the coming years to make the choice even easier. The tablet PC will be one of the few segments that will grow as well, allowing Original Equipment Manufacturers to come with creative designs. The future is just wonderful, don’t you think?