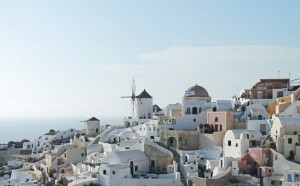 Day 548. Greece and Europe are arm-wrestling. Yes, Greece needs to repay its debt, we all agree, including the Greek government. Although I am no subject-matter expert in the Greek crisis, I have read tons of articles on the whys and the hows of this crisis, and no one mentionned the fact that Yanis Varoufakis, the Minister of Finance, that everybody seems to like to hate, is one of the best experts in game theory.

Read in Wikipedia: « Game theory is mainly used in economics, political science, and psychology« . Interesting that the first three topics are the one listed here. I would be a member of the famous troika, I would be worried playing chess with one of the best masters that exist. Imagine trying to beat Kasparov. You would probably gather all the best chess experts to get the best player to play. But still, there will be some uncertainty.

Varoufakis and Tsipras seem to place a big bet on organizing the referendum this coming Sunday, but I bet this esteemed professor knows what he’s doing and knows the odds are in his favor. This is what probably worries the troika: what they saw as a dwarf they could command may actually be the David who defeated Goliath with his sling. The story’s not over and our game theorist is certainly enjoying the game.