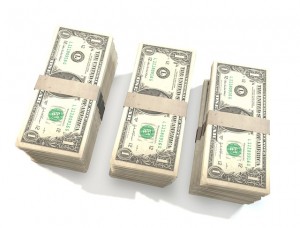 Day 546. The promise of credit houses makes is to treat yourself now, pay later. The problem is this promise makes the bank richer and the debtor poorer. What? This is not what your banker told you. No, because your banker has a direct interest to lend you money: to make more money. Nothing’s fundamentally wrong with that or with debt, but depending on what you are purchasing with debt, it will have an effect on you wealth. Want a demonstration? Here’s a simple one.

If you have a car, it’s almost sure you paid it with a credit. If not and paid it in cash, bravo! But for the sake of the demonstration, let’s say you have (or will) paid with a credit. The car of your dreams costs 20,000 dollars (or euros, or pounds, chose your currency). Your financial institution proposes you to purchase it with a 5% interest credit over 6 years. You are lined up to repay 322 dollars per month for 72 months, a total of 23,191 dollars. 6 years later, the value of your car will have drop by close to 65%, and if sold will bring you, let’s say 7,000 dollars. This means this car will have cost you slightly more than 16,000 dollars over 6 years.

Now imagine you set aside 322 dollars per month for 6 years at 2.5% interest annually (less than the 5% for sure, but easily found anywhere). After 72 months, you will have 24,985 dollars interests included (in this case you gave your money to the bank who in exchange pays you interest). With this amount you pay cash your 20,000 dollars car, while having earned close to 5,000 dollars. The question of course is yes, but during 6 years if you needed a car, what did you do? You could have taken public transport, rent a car when needed, or carpool. If you spent less than 16,000 dollars, you have started a virtuous circle that will put you in control and will have your money work for you!

However, beyond the fact that you are now in control, your financial institution will start a different dialogue with you. Yes they paid 2.5% interest on the money you left on your account, but rest assured it will have used this money to lend it to somebody else, generating more than the 2.5% it served you, so net, it has made money and can count on a good customer.

Of course in the example above we should have factored inflation and other factors on car pricing, but even if we complicate the example, the math will stay the same, and it comes to a simple principle: the lender gets richer, the borrower gets poorer. There is one, and only one, exception to this principle and it’s when the loan is contracted to purchase an assets that generates more than it costs. In other words, if your car will allow you to make money, is necessary to make money and the sum you will make covers the price of the repayment, then this debt is a good debt. This is the principle number 2 of the 3 rules I explained in a previous post.

We will see in a following post that this does not apply only to cars or houses, but to other goods, that should always be acquired in cash!