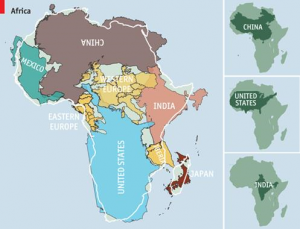 Day 501 – Bertrand, a friend and colleague of mine, sent me a short while ago the map of Africa, displayed on the right here. If you think China or India or the USA is big, Africa is even bigger, it’s actually bigger than the sum of the three. It takes more than 8 hours to fly from Nairobi, on the East, to Dakar, on the West, with a direct flight. Much longer than to fly from New York to Los Angeles for instance.

Africa is an extraordinary diverse continent, both in terms of landscape and people. Looking at Africa as a single identity is a mistake, although there is an African culture and there are ties between all those people and culture. There’s a quote from Kwame Nkrumah, first Prime Minister of Ghana, an influential advocate of Pan Africanism and a founding member of the Organization of African Unity, that I particularly like : « I am not African because I was born in Africa but because Africa was born in me. » To understand this, you need to visit Africa, but not one country, many, to understand that Africa is diverse and Africa is unique.

It is said Africa is the future. I cannot predict what the future is. However, having visited a lot of countries in Africa and having still a lot to visit, I can say one thing: Africa is changing fast, very, very fast, and today is the best day to go there and discover a world on its own, diverse and unique.